Ben’s autism singlehandedly killed his near obsession with, and considerable talent for, playing baseball. So it feels like something of a blessing that Ryan, my curly haired 5-year-old, shows interest in a game for which my father and I hold such reverence.

The boys stayed the weekend with me, but they ran into their mother at Ryan’s first day of T-ball practice. He was the youngest and littlest of the kids that gathered on a sunny winter afternoon in San Diego. 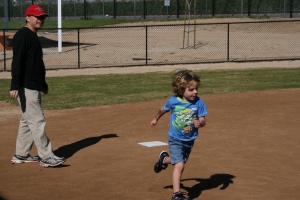 And though I wasn’t prepared for it, Teresa’s boyfriend, Kevin, was there as well. How I would respond to this potentially difficult situation is revealing.

The first time I met Kevin, it didn’t go well. At the time I still had the house but Teresa was living there with the kids. One day I knocked on the door and when Teresa opened it, I could see Kevin emerge in the background. So this is the guy, I thought to myself. As he approached, I saw that he was smoking a cigarette. He was “the man,” pushing his chest out and brandishing his authority like a sword, or so that’s how I conjure it today. My instinct was to attack. I lost control. Said things I would later regret. Raised my voice.  Total drama king.

Back at practice, Kevin ran to get something from his car. I took the moment to chat with Teresa. Mostly about Ben. She told me he’s been more social of late, and I agreed about his modest progress. I told Teresa that I see Ben engaging more with people and his environment — or more accurately, trying to engage. He’s taken to copying, or modeling if you prefer, practically everything that Ryan does. Sometimes I play-shoot Ryan and he dramatically falls to the floor and closes his eyes. Ben will drop to the floor right next to his brother and play dead too.  And when Ryan gets up, so does Ben. It’s as if he’s going through the motions without getting the larger concept. Still, it’s good to see.

What’s not good to see is Ben’s stutter, which has never been an issue until this week. Since he was diagnosed at 3, he’s had significant speech impairments and said very little except for one-word utterances. In the Shopping essay, I mentioned one exception, a fairly long sentence that Ben likes to repeat: “We have to get ice cream at the store.” He said it again Saturday, but it came out like this:

It was heartbreaking, yet encouraging, to see Ben expend such energy and effort to speak a simple sentence. Right when you think the regression has tapered off and maybe plateaued, a new problem is added to the mix. Teresa and I agreed that we need to nip this one in the bud. Later that evening, I emailed Ben’s teacher to make sure they’re on top of it. It felt good to be back on the same page with Teresa.

Meanwhile there was action on the field. Ryan held the bat as the coach guided his swing. 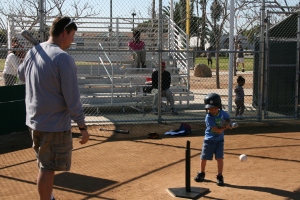 Teresa watched with Ben on her lap, smiling in the sun, holding him close. I had my camera and starting shooting away; your kid playing organized baseball for the first time is a big deal. Out of the corner of my eye, I noticed that Kevin was snapping photos, also playing the dad role, or so it seemed. However, this time his actions didn’t antagonize me. That was the surprising part — that throughout the afternoon I felt entirely relaxed and in good spirits. Whatever anger, resentment or regrets that I had once harbored, seemed to have subsided.  Instead it felt like we were all part of an extended family. I guess there’s nothing like baseball — and a child with autism — to bring people together.

The difference is that now Teresa’s dating her dad. You see, Kevin and her dad speak a common language of mechanical engineering and both are handy, unsentimental, problem-solver types, and as such, are so unlike me. In Kevin, Teresa has finally found a like-minded soul. Hold it, engineers do have souls, right? (I kid the engineers).

The truth is, I am beginning to like Kevin. I’m sure my sudden affection for a guy I once called an asshole  has something to do with his manner with my boys. This weekend I saw them together for the first time, and I like the way he is with them. It could also have something to do with “ego management.” My feathers don’t seem to get ruffled so easily anymore. Maybe it’s because my recent descent has been so vast and fast, and in response, my ego decided to take a vacation.  Or maybe it’s just that I’m mellowing with age. Either way, it bodes well for the boys and for me too.

After Ryan’s T-ball practice, I gave him a big high-five. I gathered his glove and cleats. Next on the agenda: By-byes to Mommy and Kevin, then back in the car to Papa’s house.  Ryan gave Teresa a tremendous hug and to Kevin he gave a shy smile. But Ben had receded into the recesses of his own mind.

“Benny, listen to Daddy. Give Kevin…”

But before I could complete the sentence, Kevin walked over to hug Ben. It was a quick hug, a manly hug…but a hug nonetheless.  I didn’t feel threatened or even remotely uncomfortable that the once despised boyfriend was hugging my little flesh and blood before my very eyes.