You’re not listening to me.

She was scurrying about in the kitchen, moving from the sink to the oven to the cutting board: chop, chop, chop. I had something important to say and my frustration was mounting.

Adam, I can do more than one thing at a time.

But you’re not even looking at me when I speak!

I am sorry, but I can’t give you my undivided attention. I am cooking.

Many children with autism tend to avoid eye contact, and Ben is no exception. Sometimes I wonder if autism can be likened to extreme introversion. I don’t know if there’s a shy gene, but in my family there are plenty of examples of people who found social interaction a challenge or perhaps simply preferred their own space. My mother was a big personality but shyness lurked behind it. She loved throwing parties, but remained in the kitchen most of the night, preferring to be behind the scenes, the architect of the evening, the facilitator who brought people together to enjoy good food and conversation. I am a mix–more outgoing than my dad and brother, but increasingly my life is one lived alone.

Ben makes eye contact when he wants to, when he’s motivated. When he misbehaves (which is rare), he’ll give me his hand-in-the-cookie-jar look, which is completely endearing. Thinking he’s alone, he’ll grab a cookie from the pantry and become startled when I enter the kitchen. He’ll turn to me with those big round eyes and just stare innocently until I say:

It’s okay Ben, you can have it.

Sometimes he will bend down and pick up crumbs from the floor that I have yet to sweep (bad Autism Dad!). He’ll look at me guiltily, as well he should.

There are also times I catch him looking at me from a distance.  In fact, sometimes he can be hyper-vigilant. If I leave the room for a mere second, he follows me throughout the house…even to the bathroom (then again, so does Ryan). Sometimes I like to surprise the boys with some ice cream. But before I can get it out of the freezer, Ben jumps off the trampoline and dashes into the kitchen. Though Ben typically avoids eye contact, when it comes to munchies, he sees everything. He has that sixth sense.

Occasionally he will approach a complete stranger and lean in face to face to take a closer look. No problem with eye contact there. Or the way he tries to sneak a peak at Papa, who he adores, then quickly averts his eyes. Causing me to say:

I saw you checking out Papa. You love your Papa don’t you!

Saturday I was tossing the boys on the trampoline. Ryan screamed with pleasure. The very act of tossing him in the air activated his eyes like an adrenaline junky. Ben, meanwhile, had the look of a kid who just got off a rollercoaster, his equilibrium disrupted. While he may not enjoy being tossed through the air, Ben does enjoy jumping on the trampoline; in one photo his eyes suggest utter bliss, what one Autism Dad reader aptly describes as “sensory heaven.”

There is also sensory hell. An example: upon entering Chuckie Cheese, Ben literally jumps into my arms, his eyes clouded with worry, his senses overwhelmed by screaming kids and the giant-size Chuckie. If Ben is tenuous, he is also intrigued. He wants to experience it all, but from the safety and distance of my arms. If Chuckie Cheese represents a version of hell for Ben, he’s not alone. Plenty of parents can relate.

This weekend Ben was especially smiley. I got directly in his face and stared straight into his eyes. I gave him a warm smile and a big kiss. Truthfully, I think it was a little much for him, a bit overwhelming, but he was too nice to say anything and tolerated me. I’m sure he wanted to say:

Dad, do me a favor. Try to pretend cool.

Who cares about cool!?!? I’m cashing in on my hugs and kisses while I still can.

As evening approached and the sky turned black, Ben’s eyelids got heavy and he stared blankly into the distance. I looked at my dad and we exchanged a knowing smile. Time for bed. As I tucked Ben under the covers, I looked into his eyes. I recalled what my friend Gaby once told me. She is the executive director of an autism-services agency in Tijuana. After exchanging photos of our kids, she remarked:

Children with autism seem to have the prettiest eyes.

It’s like you can see right into their souls. 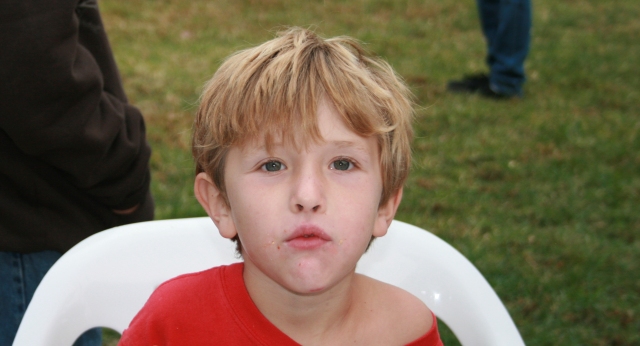 I hope over time that Ben’s eyes will have more contact and connection with the larger world, that he will see many things, sunrises and sunsets, cities and countryside, and that one day he will peer into a microscope and read a book and that one day his green, soulful eyes will meet another’s eyes, a pretty girl’s eyes.

And for a moment as strange as it is thrilling, they will sit and stare deeply into each other’s eyes.