You remember Ryan, Ben’s little brother, the little curly-haired surfer dude who doesn’t get much mention on Autism Dad. Since Ryan turned 5 on New Year’s Eve, I thought he just might be deserving of a little ink.

Ryan’s come a long way. When he was 2, a speech delay caused worry that he too was autistic. For a while, he received speech therapy through the school. When you see him now, he is full of life, verbal and quick, playful and sweet. He is good at assembling things and problem solving. He is an attention junky who, when he doesn’t get his fix, can be ornery.

I am grateful that Ryan will have a normal life, or what society considers a normal life. But feeling gratitude for having a “normal functioning” child makes me feel that I am somehow diminishing Ben, which I would never do. I hated when my parents compared me to my brother — and here I am doing the same thing! So I will henceforth stop; let’s just agree that Ben and Ryan, like your child and all children, are perfect and precious in their own ways. Let’s also agree that parents who have multiple kids on the spectrum are worthy of our greatest respect. They do not feel cursed — burdened at times, of course, but equally blessed. 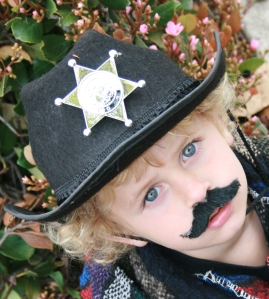 Ryan’s still very much in his Me phase where the world revolves around him. He loves to play with his action figures and watch Scooby Doo, whereas Ben has never engaged in toy-play. I like to observe Ryan when he’s in his zone, immersed in play, unaware of my proximity: the way he creates his little worlds, or fantasies, and involves his toys in his good-guy-versus-bad-guy dramas.

But it’s also a period of transition for Ryan, as he asserts his independence. Like some pint-sized revolutionary, he recently pulled off a well orchestrated protest, boycotting Daddy for two weeks until he got his “big boy” car seat. He can operate the Roku and always looks for occasion to show me that he doesn’t need my help. When he turned 5, he said, “Now you can’t call me baby.” Yeah, like that’s going to stop me.

The other day Ryan said he wanted more cuddling time with me. Did this kid receive assertiveness training or what? I was very happy to see he has no problem advising me of his needs. In all seriousness, it’s good for me to keep this in mind. Ben is so cuddly while Ryan is always on the move and seems to have less need to be held. But the affection distribution meter is out of whack. He’s right that it’s become lopsided. The little revolutionary has spotted an injustice, and now that I am aware of it I will address it.

Ryan loses patience with Ben easily. If Ben harmlessly stumbles into Ryan’s space and God forbid brushes up against him ever so slightly, Ryan practically has a crying fit. He points to Ben like a prosecutor: “He did it!” On the trampoline there are now turf battles.

If sometimes Ryan becomes annoyed at Ben, I don’t rush to protect Ben, because I don’t want to create an artificial bubble around him. That’s not fair to Ben or Ryan. It’s why I don’t hesitate to punish Ben with timeouts or mock-spankings and even look for opportunities. It’s important for Ben to know that he won’t receive special treatment. Of course it’s equally important for Ryan to see this. 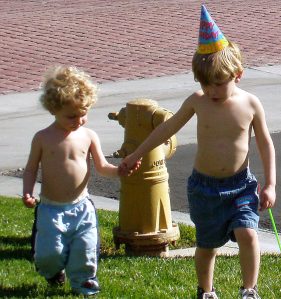 How much does Ryan know? Occasionally he asks, “How come Ben doesn’t answer me?” or “Ben doesn’t really say much of anything, does he, Dad?”  I’ve never spoken to Ryan in any detail about Ben’s autism. He understands that Ben is different from other kids. Sometimes I wonder how this is shaping Ryan. It certainly means he will have to adapt to more alone time and become more independent. Will he become a strong, caring brother who looks out for Ben? It’s already happening. All I know is that I don’t want to be on Ryan’s bad side. What if he boycotts me again?

Editor’s Note: Read about a mother with three children on the spectrum