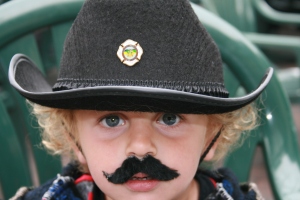 Who gets the boys for Halloween? Our divorce agreement stipulates that each year we alternate holidays. A few weeks ago, I emailed Heather to remind her that it’s my turn to have the boys for Halloween. She never responded. Next time I saw her, I confronted her about it and she made it clear that she would not be handing them over to me. Her flagrant disregard for a legal agreement that she signed made my blood boil.  However, with the boys a few feet away, buckled into their car seats, I decided now was not the time to pursue this.

I drove away baffled, angry and impotent to do anything about it. This was a black and white issue and I could think of no reason I should compromise. It was important to stand my ground – if I gave her an inch she would take a mile.

And yet these issues are never as clear-cut as they seem. One of my strengths (or weaknesses) is that I can see issues from different perspectives. I recognize, for example, that Heather gets almost giddy as Halloween approaches—taking the boys to carnivals and pumpkin patches and spending hours decorating the home and yard. There’s something endearing about her when she’s happy. It seems almost criminal to deny her.

That said, there will be no resolution today. The only thing I’m certain about is my ambivalence.

I’ve been living with my dad while I try to put the pieces back together after losing my wife, my home, my business and all my savings. But look at what I do have: two boys who are almost too good to be true and a father who helps look after me during this difficult chapter in my life—and does so without judgment. Right now my father’s in bed reading or maybe watching an English mystery on public television. I am setting up camp on the patio; in a couple hours my boys and I will be ensconced in sleeping bags in the cool fall air, under the light of a full moon.

Returning to the home in which I was raised feels like going back in time and provides a connection with the past that brings me considerable comfort. The home was once filled with warmth, music, dancing, good books, and meals lovingly prepared by my mother. Nor do I idealize the past: there was also an equal amount of disappointment, resentment and a take-no-prisoners manner of verbal warfare practiced by my parents.

I was very close to my mother, Barbara; it’s a name that seems to have gone out of style. She had a giant sized heart and took pleasure in giving to others much more than she received. When I experienced the anxiety of adolescence, she comforted me and gave me bear hugs that nearly swallowed me. She felt her mother had never shown her the affection and attention that she desired, so she made up for it with me, her second born.

She died in 1993 from complications related to diabetes and cancer. She was 56 and never got to meet Heather or her grandchildren. However, there are many reminders of my mother in this suburban San Diego home that my parents bought in 1968. Recently I dusted off her collection of auburn vases, which had once given my mother untold pleasure as it caught the late afternoon sunlight. She had a huge appetite for literature and her vast inventory of novels and poetry books has not been disturbed. However, her legacy is much bigger than that. It has more to do with the intensity and depth of her feelings, of which I was a fortunate recipient. Currently my finances do not allow me to spoil Ben and Ryan like they deserve; however, what I do have is a reservoir of affection and compassion for my boys and an unlimited supply of bear hugs. My capacity to love and express love is something I largely inherited from my mother, genetically if not by osmosis.

I drive the 45 minutes to pick up the boys in the parking lot of a generic strip mall, where Heather prefers we meet. On the way up I analyze what to do about Halloween. If I do nothing, I feel weak; if I get heavy handed and emotional, I will come across as an ass-hole and still not get my way. Then a breakthrough comes: what if we compromise? I know, novel concept, but after going to court to enforce your rights, compromising is the last thing you want to do.

“I’ll drive up to your neck of the woods,” I told her. “Just give me an hour with the boys trick or treating and you can have them for the rest of the night.” She was agreeable and I felt I did the right thing. I will get to see the boys in their costumes, accompany them to some homes, take some pics (which I’ll share on Autism Dad), and grab a handful of my boys’ candy just because I can…and because that’s what my dad did to me. (Yes, I was an abused child.) And this way I don’t rain on Heather’s parade— she’s had a tough go of it and deserves a little fun.

Heather drives away and now it’s just me and the boys. “First things first,” I tell them. “Daddy needs his caffeine.”  We are greeted by the woman at the counter, who takes an immediate interest in the boys. “What is your name?” she asks Ben. He says nothing. I give him a nudge: “Use your words, Benny.” He manages to say his name in a slightly garbled voice.  “My son’s on the spectrum,” she confides.  Her now 18 year- old-son was among the first in her area diagnosed with autism. It was a different world back then. “They wanted to institutionalize him,” she told me. She advocated for him tirelessly and when necessary, loudly.

A line began to gather behind me and I became acutely aware that our conversation was now a public event, my preference for anonymity notwithstanding (With my handsome boys tagging along, it’s probably an unrealistic expectation to begin with). But this woman, who also happened to be the manager, was oblivious to the background noise. Although this conversation would be over in five minutes, I felt her concern and compassion. It was apparent in her eyes, in the questions she asked, and in the manner in which she spoke to my boys. It was a gift – a simple but beautiful connection with another human being who, for a few precious minutes, had focused her vast energy and enormous heart on me and my boys.

I pay for my coffee, though my caffeine craving seems to have vanished. I look at the manager and give her a smile full of gratitude. “Thank you again for everything. I really appreciate it.”

“I’m here most every day,” she says. “You know where to find me if you want to talk or need my help.”

“You’ll definitely be hearing from me,” I tell her. “I need all the help I can get.” I extend my hand, but I feel like giving her a bear hug. “I’m Adam.”